Is Delta 8 THC Legal in Mississippi?

Delta 8 THC is not allowed in the State of Mississippi. Though Delta 8 is federally legal due to the 2018 US Farm Bill which made industrial hemp-derived products like CBD and Delta 8 THC legal (as long as the Delta 9 contents remain under the .3% Delta-9 THC threshold), some US States like Mississippi have their own laws regarding these products in the State.

No, Delta 8 THC is not legal in the State of Mississippi.

In Mississippi, Delta 8 is not allowed. Delta 8 legal questions have occurred all across the state, as a spike of Delta 8 searches in Mississippi have increased over the past year. The "Delta-8 Effect," as it has become known, is the federally legal high users experience which originates from the Delta-8 THC (meaning tetrahydrocannabinol) content found in the industrial hemp plant -- instead of the Delta-9 content, which is federally regulated.

Many US States default to the federal guidelines as federal agencies such as the USDA have already made their determination that the federal level is .3% which is the measured dry weight of tetrahydrocannabinol. The federal guidelines also specifically mention Delta-9 tetrahydrocannabinol (THC) as the metric to measure. However, some states such as Mississippi have decided to make their state laws even more strict in order to enforce a Delta 8 THC possession limit, along with limiting other hemp derivatives serving as the legal requirement in their states.

As reported by the USDA's official agency, AGS, the trans tetrahydrocannabinol levels found in industrial hemp plants occur at such a low-level, it is impractical to measure and monitor from a federal perspective. The federal stance on tetrahydrocannabinol is clearly only to monitor the Delta-9 THC levels which are known for their pharmacological activity and are prevalent in both industrial hemp and the cannabis plant. However, the State of Mississippi took that guidance a bit further and outlawed not only Delta-9 THC (exceeding .3%), but also the hemp-derivatives such as tetrahydrocannabinol acid, isomers and more which effectively rules out Delta-8 THC being legal in the state.

With the chemical structure of Delta-8 and Delta-9 being so similar, studies have found the human body to get high from both varieties. Though originating from hemp material and not being explicitly stated in the 2018 US Farm Bill, many Mississippians were led to believe that this particular type of hemp was considered legal hemp material in the state. State legislators made it clear that this particular hemp material, though originating from the raw hemp plant, is not legal in Mississippi.

In 2018, hemp legislation took a big step forward as the president signed the 2018 Farm Bill into law, which made hemp-derived products legal across the nation. The hemp strain became an overnight sensation with the rise in CBD Stores popping up in many locations promoting the non-psychoactive cannabinoid, CBD, which is what the Farm Bill helped to achieve. However, one minor cannabinoid, Delta-8 THC, also fell into that category which met federal regulatory approval, as it is also a hemp derivative. In 2018, Farm Bill was signed into law.

According to the new federal law, any type of hemp and all derivatives are legal so long as they meet the state’s requirements for “hemp” material. The State of Mississippi had originally opted-out of the 2014 Farm Bill, but reconsidered their stance in an effort to remain current of trends and to increase productivity from the state's agriculture sector.

In an effort to amend the Controlled Substances Act, House Bill 1547 sponsored by representatives Willis, Paden, and Reynolds was brought to the floor. In addition, they required the Commissioner of Agriculture and Commerce to form a task force to, among other things, "Make a comprehensive study of the potential for cultivation of hemp in this state."

These female plants are selected through breeding for high CBD but must have low Δ-8- and Δ-9-tetrahydrocannabinol (THC; the psychoactive agent limited to 0.3% in hemp).

Whereas "Δ-8-tetrahydrocannabinol" is the scientific symbol of Delta-8 THC, the task force named this minor cannabinoid as a form of THC which should be limited in industrial hemp. The report also brought up the concern for how law enforcement officers would handle hemp possession occurrences. In the Law Enforcement Committee Report section of the report, they stated:

By federal definition, hemp is any part of the cannabis sativa plant with a THC (tetrahydrocannabinol) concentration of not more than three-tenths of one percent (0.3%) on a dry weight basis. Because the only distinction is the THC level, a hemp plant is not distinguishable from a marijuana plant through sight or smell. Even field tests utilized by law enforcement only discern the presence of THC, but no quantification. Therefore, the predicate question moving forward for law enforcement, as well as any licensing/regulatory entity, is how to quantify THC levels. This is the singular greatest challenge the law enforcement and prosecutorial community will face in keeping this drug from becoming impossible to thwart.

Taking the insights gathered from the report, lawmakers were ready to make their decision regarding the new regulations. Passing the House 98 to 16 and then the Senate 42 to 4, the bipartisan bill was passed, and signed by the Governor in April 2019.

Using the same language from the House Bill, Senate Bill No. 2725 brought up the topic about tetrahydrocannabinols.

On the books, the bill doubled-down on tetrahydro derivatives making it clear of the state's stance regarding any form of THC:

All considered, the new state law in Mississippi effectively prohibited the possession of Delta-8 THC.

In 2019, Mississippi amended its laws with Miss. Code Ann. 41-29-113 which was one of the aims of House Bill 1547. This amendment was brought to the floor originally to align with the federal 2018 Farm Bill relating to hemp-derived products (such as CBD and THC under .3% Delta-9 THC), and hemp-derived products with a ratio of 20 to 1 (CBD and THC) were removed from the Schedule I list.

Buying and Shipping Delta 8 in Mississippi

Since Delta 8 is illegal in the State of Mississippi, residents can not order D8 products with a shipping address located in the state, as Delta-8 THC is not allowed.

Though Delta-8 THC is considered a federally legal hemp product, citizens located in Mississippi are not allowed to participate in the purchase of hemp product, Delta-8 due to the THC-content prohibited in the state.

Mississippians show their support of Delta 8 and pushing towards better Hemp Laws. Check out some of the standout organizations in the State:

The curious case of Delta 8

Mississippi's marijuana program might be overturned, but dozens of companies are starting anyway 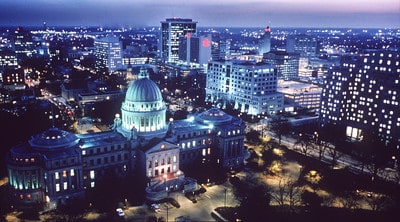 “Stanford, the assistant director of the research institute of pharmaceutical sciences, said that while Delta 8 is gaining popularity, it is only as safe as any other drug and advises people to be careful if they use it."
- Maddy Quon The Daily Mississippian