Delta 8 THC is an industrial hemp product that has many benefits and uses. You may be wondering if Delta 8 THC is legal in Arkansas, and the answer to this question is yes. Delta 8 THC, being psychoactive, now meets the standards set by Arkansas state law.  The legality of THC in Arkansas has been debated among residents and local politicians and recent polls suggest the wider adoption of THC within state borders.

Arkansans are fans of psychoactive cannabinoids such as Delta-8, Delta-9 and HHC-- all which are different types of THC.  All varieties of THC are available to enjoy within statelines.  For example, purchasing hemp-derived Delta 9 online from a reputable source gives you options to select the types of THC contents you want.  If it's the hydrogenated form of THC that you're really looking for then HHC for sale can also be purchased online being that all types of THC are derived from the industrial hemp plant and occur naturally in the plant.

First it was CBD and then it became Delta-8.  If you are looking for a complete explanation as to why this cannabinoid is legal in the state, then read on!

Yes, Delta 8 THC is legal in the State of Arkansas.

In Arkansas, Delta 8 is now allowed. Though, medical marijuana in the state was legalized in 2016, it had many people believing Delta-8-THC was illegal in the state, but now we have learned that Delta-8-THC is legal in Arkansas. It deals with how the law was written so let's explore about the current legislation in the state.

Can you smoke Delta 8 in public in Arkansas?

No, you can not smoke Delta 8 publicly in the State of Arkansas.  With the research we've conducted, it seems that smoking Delta-8 in public could be problematic in the state.  This is because the state is very clear about the status of smoking cannabis products within the state.   Originating from their stance on medical marijuana laws, the Arkansas Department of Health defines a public place as the following:

Additionally, the health department confirms, "Using medical marijuana is also prohibited in a health care facility or any other place where smoking is prohibited by the Clean Indoor Air Act of 2006 and knowingly in close physical proximity to anyone under the age of 18."

Due to the nature of a public place, it would be difficult to justify the use of a similar unregulated cannabinoid such as Delta-8 THC being used -- even though hemp-derived Delta-8 THC is federally legal due to the passage of the 2018 Farm Bill!

Until new laws are on the books and Arkansas's Delta-8 policy is corrected, if using vape or flower products in the state, you should proceed with caution to not get in trouble with local law enforcement.

The intoxicating effects of delta-8 THC-containing products can sometimes be found to be in conflict with the official Arkansas Delta-8 laws.  Amendments to cannabis laws changed marijuana penalties for patients involved in the state's medical marijuana program.  Suddenly the psychoactive cannabinoid in marijuana which is also in industrial hemp -- Delta-8-THC and HHC -- has become a topic of interest as Delta 8 THC Legal concerns began to be top-of-mind for many in the state.

Originally when the 2018 Farm Bill was put together these particular cannabinoids were known by science, however were considered unclassified substances for lawmakers as the main psychoactive cannabinoid, Delta-9-THC, was the only cannabinoid explicitly listed as not to exceed .3% as measured on a dry weight basis.  Marketable hemp products therefore included any product derived from the industrial hemp plant which met this standard mandated at the federal level.

This action opened up an entire hemp market across the nation, and legal hemp become available everywhere.  The cannabis plant (including cannabis flower) remains federally illegal, but is legal in some states.  While delta 8-infused flowers -- as long as they're derived from industrial hemp-- remain federally legal, but are illegal in some states.  Sorry if you thought that you could legally buy pounds of marijuana online -- it's only the hemp cannabinoids, including the psychoactive ones, which are legal in most localities across the nation!

The State of Arkansas has it's own medical cannabis program and Delta-8 laws continue to be re-examined.  Classical cannabinoids such as cannabidiol (CBD) aren't as much of a concern as some synthetic substances produced by fly-by-night manufacturers.  The status of hemp in Arkansas dates back to 2017 with Arkansas Hemp Act which provided guidance for how the state views its stances on hemp.  Cannabis extracts and cannabinoid isomers legal status was affected as legislators passed state laws involving the limitations on tetrahydrocannabinols and trans tetrahydrocannabinol for products in the state.

According to a proposed rule back in 2018, the Arkansas State Plant Board approved an amendment to 2-15-408 from the Arkansas Industrial Hemp Act (published in 2017), which effectively generalized all THC-levels as a focus for regulation.

In their definitions, they state:

"Total THC" means the completion of the chemical reaction that converts THC-acid into delta-9-THC, the intoxicating component of cannabis. The decarboxylated value may also be calculated using a conversion formula that sums delta-9-THC and THC-acid.

In order to sell THC-products, such as Delta-8 THC, the grower must also prove that the seed (or transplanted crop) that "were harvested had a THC analysis of 0.3% or less by dry weight," according to the guidelines.

"Tetrahydrocannabinol" means the natural or synthetic equivalents of the substances contained in the plant, or in the resinous extractives of, Cannabis sativa, or any synthetic substances, compounds, salts, or derivatives of the plant or chemicals and their isomers with similar chemical structure and pharmacological activity.

Since Delta-8 THC is so closely related to Delta-9 THC, it seems that all forms of THC are deemed to be illegal in the State-- unless it's Delta-8 THC or purchased with a medical card at a dispensary.

The Arkansas Industrial Hemp Act 2-15-408 permits the cultivation, processing and sale in this state of industrial hemp plants or products grown from such plant material, with some exceptions. The grower must register to be an authorized grower and abide by the rules governing the program. Growers are required to provide information about how they comply with federal law.

Even though the 2018 Farm Bill permits derivatives of industrial hemp not exceeding .3% delta-9-THC, the Arkansas Department of Agriculture has its additional rules to follow.

The law provides that a person required to obtain a hemp license for cultivating industrial hemp, can do so by submitting an application and payment of $50 to the department in this state.

Delta-8 THC is not listed specifically, but being that Delta-8 is in the tetrahydrocannabinol family, it is considered a Schedule VI drug, according to the List of Controlled Substances in Arkansas.

(a) In addition to any substance placed in Schedule VI by the Director of the Department of Health under § 5-64-214, any material, compound, mixture, or preparation, whether produced directly or indirectly from a substance of vegetable origin or independently by means of chemical synthesis, or by a combination of extraction and chemical synthesis, that contains any quantity of the following substances, or that contains any of their salts, isomers, and salts of isomers when the existence of the salts, isomers, and salts of isomers is possible within the specific chemical designation, is included in Schedule VI:

In states like Arkansas that specifically list Tetrahydrocannabinols as a controlled substance in their own State's laws, it is illegal to buy and sell industrial hemp-derived Delta 8 products.

Tetrahydrocannabinols in hemp are similar to the psychoactive substance found in the cannabis plant. However, unlike cannabis products (which are legal in the state with a medical card but not federally legal), hemp-derived delta-8 THC are federally legal, but illegal in Arkansas due to how the laws were written.

At the federal level, cannabis-derived compounds have been regulated for decades and considered an illegal substance. The 2018 Farm Bill signed by the president essentially made hemp derivatives used in hemp-derived products legal, as long as the delta-9 tetrahydrocannabinol concentration remained at or below the 0.3% Delta-9 THC threshold.

Legal Delta-8 can be purchased in most US States, however, until Arkansas changes how their laws are written, the state will be missing out on the commercial Delta-8 market.

Buying and Shipping Delta 8 in Arkansas

Since Delta 8 is legal in the State of Arkansas, residents can now order Delta 8 products with a shipping address located in the state as Delta-8 THC is allowed in the State.  That means Delta-8 Edibles and Delta-8 Flower can be used as long as you're following local laws. As a Delta-8 distributor, you also have options to resell products as a wholesaler with our wholesale program.  There are many ways to experience the Delta-8 effects!

Arkansans show their support of Delta 8 and push towards better Hemp Laws. Check out some of the standout organizations in the State: 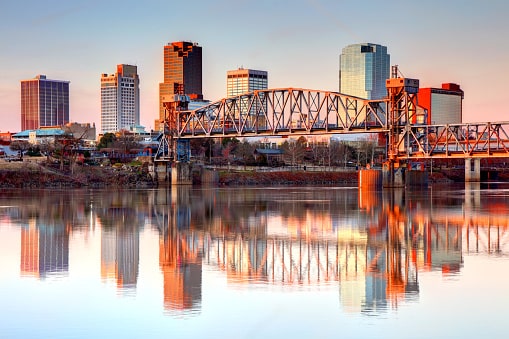 “According to the latest report from the Arkansas Department of Finance and Administration, the 6.5% state sales tax and 4% privilege tax established by the legislature have netted about $31,663,022 as of March 31, 2021."
- John Lovett Southwest Times