We look at what the law says about the legality of buying, selling and using Delta-8 THC in the State of Alabama.  Let's start first by answering the question: Is Delta 8 THC Legal in Alabama?

Yes, Delta 8 THC is legal in the State of Alabama.

Delta-8 THC is legal according to the state law of Alabama. Similar to the federal law on Delta-8, Alabama legalized all industrial hemp derivatives, including all tetrahydrocannabinols (except Delta 9 THC).

Can you smoke Delta 8 in public in Alabama?

Yes, you can smoke Delta 8 in the State of Alabama.  This has recently become public knowledge as Alabama Public Radio has confirmed suspicions that, "Alabamians can smoke delta-8," in their recent article.   The article referenced vape products, however, Delta-8 flower and prerolls are also acceptable to smoke in public.  Other minor cannabinoids such as HHC products are also safe to smoke in Alabama, and also provide similar psychoactive effects.

In fact, the Alabama Board of Pharmacy Office in Birmingham released a letter on September 15, 2021 stating:

This is in response to your letter dated August 19, 2021, in which you request the control status of delta-8-tetrahydrocannabinol (Δ-8 THC) under the Controlled Substances Act (CSA).  The Drug Enforcement Administration (DEA) reviewed the CSA and its implementing regulations with regard to the control status of this substance....

Hemp advocates from across the state applaud the news now that hemp-derived Delta-8 is not considered a controlled substance.  Both medical marijuana and recreational marijuana have their place, but now you know it is safe to enjoy legal delta-8 THC products now in the state.  Hemp industry advocates still remain concerned with delta-8 THC's future as Delta-8 Hemp Businesses continue to pop-up across the state.  Nobody wants to see the prevailing issues of ineffective, cheap products being sold at convenience stores anymore-- like what happened with CBD sales many moons ago.

Beyond the business aspect, there are also murmurs of a controversial amendment in the works which may be presented at the next legislative session.  The Delta-8 issue has not been completely solved across the nation it seems.  After all, Delta-8 Tetrahydrocannabinol (Delta-8 THC) still has the "THC" in its name with years of baggage to overcome.  The original legislation on the topic-- as we know it today--  of industrial hemp dates back to the passage of the 2018 Farm Bill.

Let's take a look at the current legislation involving Delta-8 THC and industrial hemp, in general.

(4) Industrial hemp.  All parts and varieties of the plant Cannabis sativa, cultivated or possessed by a licensed grower, whether growing or not, that contain a delta-9 tetrahydrocannabinol concentration of not more than 0.3 percent on a dry weight basis.  Industrial hemp shall be considered an agricultural crop or an agricultural commodity, or both, in all respects under state law.

With this piece of legislation, legislators are specifying "all parts and varieties of the plant" which includes isomers of hemp, such as Delta-8 THC, salts of isomers, and more as legal under state law-- as long as the "delta-9 tetrahydrocannabinol concentration" (Delta 9 THC) does not exceed .3%.

In gist, the Alabama Legislature has made it quite clear that Delta-8 THC is considered a part of the legal hemp plant which is protected by the Ala. Code § 2-8-381 Act throughout the 2021 year, and possibly beyond.

Alabama's Industrial Hemp Act is administered by the Alabama Department of Agriculture and the new rule became operative November 1, 2020.

"Acceptable hemp THC Level” means, for the purpose of compliance with the requirements of a State hemp plan under the USDA rules, when the application of the measurement of uncertainty to the reported total delta-9 tetrahydrocannabinol content concentration level on a dry weight basis produces a distribution or range that includes 0.3% or less. This definition of “acceptable hemp THC level” affects neither the statutory definition of hemp, 7 U.S.C. §16390(1), in the 2018 Farm Bill nor the definition of “marihuana,” 21 U.S.C. §802(16), in the CSA.

"delta-9-THC" means total delta-9-tetrahydrocannabinol concentration (the primary intoxicating or psychoactive component of cannabis) which includes the measurement of uncertainty applicable to the definition of “acceptable hemp THC level”.

"Hemp" or "industrial hemp" is the plant Cannabis sativa L and any part of that plant, including the seeds thereof and all derivatives, extracts, cannabinoids, isomers, acids, salts, and salts of isomers, whether growing or not, with a total delta-9 tetrahydrocannabinol concentration of not more than 0.3 percent on a dry weight basis. Industrial Hemp shall be considered an agricultural crop or an agricultural commodity, or both, in all respects under state law."

To recap, Delta-8 is a hemp product made from the isomers of the industrial hemp plant which may contain delta-9 THC (at the acceptable limits), though is totally legal under Alabama State Law!

Now let's compare this with the controlled substances listed for the State of Alabama.

Of course, hallucinogenic substances are on the list of controlled substances for the state, but THC didn't show up at all in the list. "Marihuana" did show up on the list, which is defined as:

Marihuana Extract. Meaning an extract containing one or more cannabinoids that has been derived from any plant of the genus Cannabis, other than the separated resin (whether crude or purified) obtained from the plant...

Since Delta-8 THC is technically considered a cannabinoid, this may concern many-- but have no fear.  When we trace it back to the original AL Code § 20-2-2 (2016) Act, where it states:

(14) MARIJUANA. All parts of the plant Cannabis sativa L., whether growing or not, the seeds thereof, the resin extracted from any part of the plant, and every compound, manufacture, salt, derivative, mixture, or preparation of the plant, its seeds or resin. Such term does not include the mature stalks of the plant, fiber produced from the stalks, oil or cake made from the seeds of the plant, any other compound, manufacture, salt, derivative, mixture, or preparation of the mature stalks (except the resin extracted therefrom), fiber, oil or cake, or the sterilized seed of the plant which is incapable of germination. Marijuana does not include industrial hemp as defined in Article 11 of Chapter 8 of Title 2.

The Article 11 of Chapter 8 of Title 2 definition of marijuana is:

HEMP PRODUCTS: Any and all products made from industrial hemp, including, but not limited to, cloth, cordage, fiber, food, fuel, paint, paper, particleboard, plastics, seed, seed meal and seed oil for consumption, and seed for cultivation if the seeds originate from industrial hemp varieties. See Alabama Code 2-8-381

And Alabama Code 2-8-381 is what we were referencing in the legislation section (above) regarding Delta-8 THC (and other cannabinoids) being legal in Alabama.

Buying and Shipping Delta 8 in Alabama

Since Delta 8 THC is federally legal and legal in the state, hemp-derived products such as D8 are frequently bought and shipped in Alabama. As long as the mailing address is located in Alabama, and considering the product doesn't exceed the .3% delta-9 THC limit, there is nothing wrong with buying Delta 8 online in Alabama.

Alabamans are exceptionally supportive of Delta-8 and advocating for hemp, in general. Below are some of the standout advocacy groups:

If you see a cause you can stand behind, whether it be advocating for hemp or for the federal legalization of marijuana, consider joining!

Since 2018, there have been concerns of CBD store owners wrongfully arrested in Shelby County, CBD sale crackdowns in Colbert and Lauderdale Counties, and other related incidents involving questionable raids and busts across the state. Law enforcement officers are becoming more educated as our community evolves and laws change, so to give you a better idea for what is happening in the state, we want to share some of the latest news updates to keep you informed.

This page is updated regularly. If you'd like to send your news story involving the legalities of THC products in Alabama, feel free to contact us and submit your story for updating this page!

Your guide to Delta-8 in Birmingham

Concerns about these chips, candies, and crispy treats that are getting children high 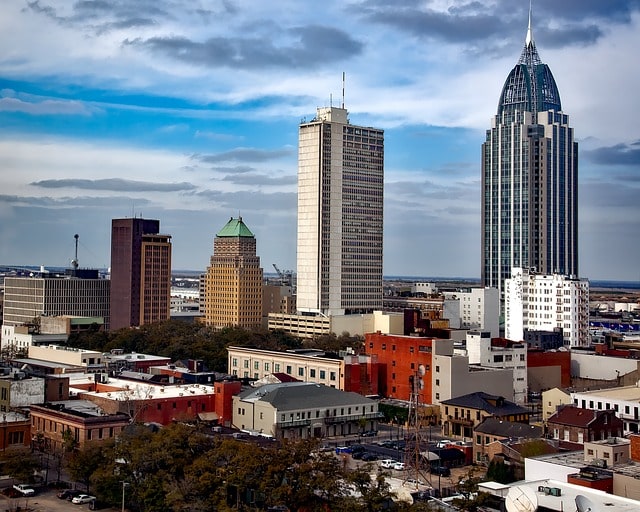 “Some herbalists claim that Delta 8 and Delta 10 have their own unique health benefits, like CBD. Both products, like CBD, are currently legal in the state of Alabama."
- Brandon Moseley Alabama Political Reporter