Is Delta 8 THC Legal in Nebraska?

Delta 8 THC is legal in Nebraska. Why? The Delta 9 threshold is governed by a federal law stating that any product with less than .3% of Delta 9 THC will be federally legalized. Many US States have legislation on top of this law and the State of Nebraska regulates hemp-derived products like CBD and Delta 8 THC to have no more than .3% Delta-9 THC which makes it legal in the state.

Is Delta 9 legal in Nebraska?

With the rise in search interest within Nebraska borders about Delta 8 vs Delta 9 legality, the question people want to know is which types of THC are legal in the state?  For Nebraskans, luckily, you have many options.  Delta 9 THC is legal as long as the federal limits are met based on products as measured on a dry weight basis.  You can find a place to buy Delta THC 9 online though you will want to be sure that you're choosing a reputable brand if you're buying in-store as news continues to be released about additional concerns from different brands.  Both psychoactive cannabinoids, Delta 9 THC and HHC for sale (which is the hydrogenated version of THC) are legal in the state.  So to get back to Delta 8 -- what does state law say about this particular cannabinoid?

Yes, Delta 8 THC is legal in the State of Nebraska.

In Nebraska, Delta 8 is allowed. Not long ago, hemp plants were considered a drug product, but now lawmakers have decided to pass legislation based on scientific testing which now loosens the laws to be more favorable for Nebraskans.

As one of the isomers of hemp, Delta-8 THC has lead to contentious debates across the nation: "THC" means tetrahydrocannabinol -- meaning tetrahydrocannabinols in the industrial hemp plant -- which is having some lawmakers scratch their heads why this particular low-THC hemp cannabinoid, Delta-8 known for its pharmacological activity, wasn't specified in the federal 2018 Farm Bill?

Currently, the Farm Bill only monitors and regulates one THC level for hemp which is the delta-9 tetrahydrocannabinol concentration. The chemical structure of Delta-8 THC and Delta-9 THC is nearly identical, though because Delta-8 naturally occurs in such small amounts when extracted from the industrial hemp plant, current hemp laws specifically monitor the Delta9 tetrahydrocannabinol concentration to not exceed .3% Delta-9 THC measured on a dry weight basis.

Legalization of hemp for Nebraskans began as early as 2014 when lawmakers proposed and approved the agricultural pilot program for the state. Hemp cultivation and hemp production began soon after following additional guidance laid out in the 2018 Farm Bill regarding uniform regulations for hemp at the federal-level. Now the the possession of hemp has become separate from the possession of marijuana in the state, and laws are heading in the right direction for providing favorable laws to Delta-8 users.

Federally defined THC level for hemp means a delta-9 tetrahydrocannabinol concentration of not more than 0.3 percent on a dry weight basis...

Hemp means the plant Cannabis sativa L. and any part of such plant, including the viable seeds of such plant and all derivatives, extracts, cannabinoids, isomers, acids, salts, and salts of isomers, whether growing or not, with a delta-9 tetrahydrocannabinol concentration of not more than 0.3 percent on a dry weight basis. Hemp shall be considered an agricultural commodity. Notwithstanding any other provision of law, hemp shall not be considered a controlled substance under the Uniform Controlled Substances Act

Testing of hemp required under this section shall be conducted pursuant to standards adopted by the department using post-decarboxylation or other similarly reliable methods for the testing of delta-9 tetrahydrocannabinol concentration.

According to the Act, the state is following the federal guidelines set forth in the 2018 Farm Bill, and are only regulating the delta-9 tetrahydrocannabinol concentration levels in Nebraska.

In 2014, the Governor approved Legislative Bill 1001 sponsored by Wallman and Bloomfield which aimed to permit industrial hemp as well as making industrial hemp an exemption from the list of controlled substances in the state.

Among other requirements, the Act defines the following:

Industrial hemp means the plant Cannabis sativa L. and any part of such plant, whether growing or not, with a delta-9 tetrahydrocannabinol concentration of not more than three-tenths percent on a dry weight basis

The reclassification of industrial hemp with this bill also enabled the pilot program which manifested into the state's hemp program we know of today.

Additional Legislative Bills (LB) including LB657 and LB1152 allowed for refining the program, improved alignment with the USDA guidelines and overall enhancement of the program to better serve Nebraskans.

According to the Statutes Relating to Uniform Controlled Substances Act, lawmakers have made it clear that hemp-derived parts of the industrial hemp plant are treated differently than marijuana.

In the document, the statutes state:

(a) Marijuana means all parts of the plant of the genus cannabis, whether growing or not, the seeds thereof, and every compound, manufacture, salt, derivative, mixture, or preparation of such plant or its seeds.

(b) Marijuana does not include the mature stalks of such plant, hashish, tetrahydrocannabinols extracted or isolated from the plant, fiber produced from such stalks, oil or cake made from the seeds of such plant, any other compound, manufacture, salt, derivative, mixture, or preparation of such mature stalks, the sterilized seed of such plant which is incapable of germination, or cannabidiol contained in a drug product approved by the federal Food and Drug Administration or obtained pursuant to sections 28-463 to 28-468.

(c) Marijuana does not include hemp.

As the type of Tetrahydrocannabinol of Delta-8-THC is extracted from the industrial hemp plant, Delta-8 is not considered a controlled substance in the State of Nebraska.

Buying and Shipping Delta 8 in Nebraska

Knowing that Delta 8 is legal in the State of Nebraska, residents can freely buy Delta 8 THC Products online with a shipping address located in the state or purchase in-stores.

Nebraskans are supportive of Delta 8 and pushing towards better Hemp Laws in the state. Check out some of the standout organizations from Nebraska:

‘A Unique Opportunity:’ Q&A with the Nebraska Cannabis Association

'It's absolutely everywhere': Delta 8, a cousin of marijuana, a hot seller in Nebraska

Delta 8 rising in popularity in Lincoln, providing a legal alternative to marijuana

What’s Delta 8? the drug police and experts want you to know about 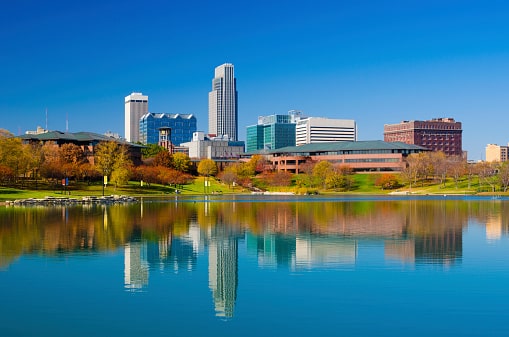 “Delta 8 THC is derived from the hemp plant and it's legal in Nebraska."
- Michelle Bandur KETV7