Is Delta 8 THC Legal in Kansas?

According to state law, Delta 8 is legal in Kansas. Though, Delta 8 is federally legal due the the 2018 US Farm Bill which made industrial hemp-derived products like CBD and Delta 8 THC legal (as long as the Delta 9 contents remain under the .3% Delta-9 THC threshold), some US States have their own laws regarding these products in the State. Unlike CBD, Delta 8 is psychoactive and will get you high. Learn about the legalities of buying and selling Delta 8 in the State of Kansas.

Yes, Delta 8 THC is legal in the State of Kansas.

In Kansas, Delta 8 is allowed. Classified as legal hemp material both federally and at the state-level, by reviewing the state's Delta-8 laws, we see that legal Delta-8 can be bought and sold in the State of Kansas. As one of the isomers of hemp-- Delta-8 THC likened to a trans tetrahydrocannabinol, resembles the chemical structure of Delta-9 THC however due to the president signing the 2018 Farm Bill, Delta-8 THC is one of industrial hemp varieties allowed by federal law as it is derived from industrial hemp.

Since the state's hemp plan has been in place, it has been the responsibility of the Kansas Department of Agriculture to monitor and promote the state's hemp program. Taking proactive steps to distance themselves from the cannabis plant, legal industrial hemp plants are continuing their fight for separation in the public's eye, too. Let's learn why the purchase of hemp products such as Delta-8 THC is legal in Kansas.

Shortly after the passing of the 2018 Farm Bill, Kansas updated hemp laws to legalize industrial hemp and its derivatives, including popular hemp-derived cannabinoids such as Delta-8 THC.

In Senate Bill No. 263(SB263), industrial hemp was excluded from the definition of marijuana and this bill provides the following definitions:

‘‘Industrial hemp’’ means all parts and varieties of the plant cannabis sativa L., cultivated or possessed by a state educational institution or the department, whether growing or not, that contain a delta-9 tetrahydrocannabinol concentration of no more than 0.3% on a dry weight basis.

Clearly state lawmakers have focused-in on specifically the Delta-9 THC levels, as prescribed by the federal 2018 Farm Bill, and effectively monitor only those types of THC levels. This bill was approved by the Governor and signed into law on 4/20/2018.

Nearly a year later in 2019, Senate Sub. for HB 2167 was brought to the floor which helped to establish the commercial industrial hemp program in the state. This was later passed and signed into state law by the Governor on 4/19/2019.

Legislative Intent [New Section 1]
The bill declares it is the intent of the Legislature that the KDA’s implementation of the Commercial Industrial Hemp Act (Act) will be conducted in the least restrictive manner allowed under federal law.

Comparatively to other US States, Kansas lawmakers have decided to be the "least restrictive" in their intent and among other aspects of monitoring the commercial hemp program, the bill's plan includes:

The State of Kansas has decidedly taken a least restrictive approach, and by monitoring the Delta-9 THC levels only, Delta-8 THC is unregulated in the state, as long as it is derived from industrial hemp. The Kansas Legislator Briefing Book goes into greater detail on the Industrial Hemp Program. Kansas Department of Agriculture's Industrial Hemp Homepage provides more clarity on the program along with the current industrial hemp laws which are available online.

With SB263 signed into law, it aimed to also exclude industrial hemp from being deemed as marijuana in the state. Industrial hemp has since been removed from the list of controlled substances in the state. Kansas has designated hemp-derived tetrahydrocannabinols as an item to be excluded from Schedule I Substances. The state of Kansas defines hemp as Cannabis Sativa material with a Delta 9-THC content of no more than 0.3%. Anyone in possession of hemp exceeding .3% Delta-9 THC is at risk of being in possession of marijuana, which is currently a Schedule I controlled substance. Therefore, anyone consuming products containing Delta 8-THC from legal hemp will not be breaking the law in Kansas, as long as the Delta-9 THC in the product does not exceed .3% Delta-9 THC.

Buying and Shipping Delta 8 in Kansas

Knowing that Delta 8 THC is legal in the State of Kansas, residents can buy Delta 8 products with a shipping address located in the state.

Kansans are continuously showing their support of Delta 8 and pushing towards better Hemp Laws in the state. Check out some of the standout organizations in the State:

Hemp taking one step closer to commercial growth in Kansas 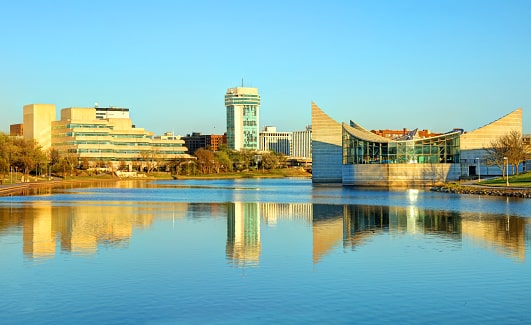 “Nationally, 36 states have some form of legalized recreational or medical cannabis. Others have more restrictive programs that only allow CBD oil and other products with low levels of THC, the compound in cannabis that is mind-altering."
- Andrew Bahl The Topeka Capital-Journal

Work in more on where to buy delta 8 in kansas, delta 8 flower kansas city, delta 8 thc wichita ks, and delta 8 thc olathe kansas the next time the page is updated.