Is Delta 8 THC Legal in Colorado?

Delta 8 THC is not allowed in the State of Colorado. According to state law, Delta 8 isn't legal. Though, Delta 8 THC is federally legal due the the 2018 US Farm Bill which made industrial hemp-derived products like CBD and Delta 8 THC legal (as long as the Delta 9 contents remain under the .3% Delta-9 THC threshold), some US States, like, Colorado have their own laws regarding these products in the State. Unlike CBD, Delta 8 is psychoactive and will get you high. Learn about the legalities of buying and selling Delta 8 in the state.

No, Delta 8 THC is legal in the State of Colorado.

In Colorado, Delta 8 is not allowed. The industrial hemp plant became legal nationwide in 2018 when the president signed the 2018 Farm Bill into law, but the legal cannabis market in Colorado had already been established and active since 2014 so why wouldn't Delta-8 THC be legal in the state, too?

Colorado and Delta 8 made from federally legal hemp are no longer meant to be according to state lawmakers. In a decision by the state's Marijuana Enforcement Division (MED), officials from Colorado banned Delta 8 and warned cannabis dispensary owners to stay clear. The Colorado Delta 8 ban has just begun and already the industry is arguing that it's compliant hemp.

Why is Delta 8 illegal in Colorado?

From the "Delta 8 illegal Colorado" headlines to the controversy in general, many wonder why Colorado bans Delta 8 THC in the first place when it spearheaded the entire "getting high legally" industry. The reason why Delta-8 THC is illegal is because Colorado's Health Department issued a notice stating in a collaborative effort with the MED that hemp-derived Delta-8 THC is "not allowed". This comes as a surprise as the MED would be the perfect governing body for monitoring Delta-8 THC, but they chose not to when they're the main authority-- in the state. By default, Delta-8 THC isn't a legal substance because it's considered a controlled substance if not purchased from a licensed dispensary.

Which cities are affected?

The ban is statewide. Boulder, Colorado Springs, Denver, everywhere in the state -- Delta-8 THC is banned and you cannot purchase Delta-8 THC Products online with a shipping address located in the state of Colorado.

For now, Colorado State has banned Delta-8 THC made from hemp material. Colorado hemp Delta 8 products, like, Delta 8 Flower, Gummies and other edibles are effectively banned in the state now.

Delta-9-THC products are legal, however, the federal protections of hemp are not applying to Delta-8 THC, for now at least.

Whether or not the president meant to federally legalize Delta-8 THC when he signed the 2018 Farm Bill into law doesn't matter at this point, hemp-derived cannabinoids are legal as long as the sampled products do not exceed the .3% Delta-9 THC level, as specified in the law. Colorado followed this guidance when updating their hemp program in 2019 which allowed for nationwide commercialization of hemp, and they became one of the top hemp-producing states in the country.

With the pharmacological activity of trans tetrahydrocannabinol variations being so similar between Delta-8 and Delta-9 THCs, it makes you wonder what's really going on behind-the-scenes?

In a letter to stakeholders, The Colorado Department of Public Health & Environment stated:

Further explaining their reasoning as follows:

... a complete profile of reactionary byproducts has not been established in association with the conversion or creation of delta-9, delta-8, delta-10-THC; therefore, insufficient evidence exists to determine whether or not any toxic or otherwise harmful substances are produced during these reactions and may remain in the regulated industrial hemp products ingested or applied/used by consumers. Therefore, these tetrahydrocannabinol isomers are not allowed in food, dietary supplements...

According to the Colorado Revised Statutes of 2017 Title 27, it defines Tetrahydrocannabinols as the following:

"Tetrahydrocannabinols" means synthetic equivalents of the substances contained in the plant, or in the resinous extractives of, cannabis, sp., or synthetic substances, derivatives, and their isomers with similar chemical structure and pharmacological activity...

Colorado has legalized hemp following the federal 2014 Farm Bill which allowed growing of hemp for research purposes. The state’s Senate Bill 14-184 defines tetrahydrocannabinols (THCs), including Delta-9 and its derivatives.

In 2019, SB19-220 amended the state’s laws governing industrial hemp to align with the new federal laws. Simultaneously with this amended Act, it removed hemp from being scheduled as a Schedule I drug in the state.

It wasn't until 2014 that marijuana was removed from the list of controlled substances, though Tetrahydrocannabinols still remain on the list. The laws are changing though, and as one local attorney stated, "Schedule I and Schedule II drug crimes are no longer considered felonies in Colorado."

In Colorado, all isomers of THC are considered controlled substances. That includes Delta-8, as well as any other variants of the compound derived from legally cultivated hemp.

Buying and Shipping Delta 8 in Colorado

Since Delta 8 THC is illegal in the State of Colorado, residents can not buy Delta 8 products with a shipping address located in the state.

Coloradans are showing their support for Delta 8 and pushing towards better Hemp Laws. Check out some of the standout organizations in the State:

All Colorado Cities Affected by Ban

City and County of Broomfield

City and County of Denver 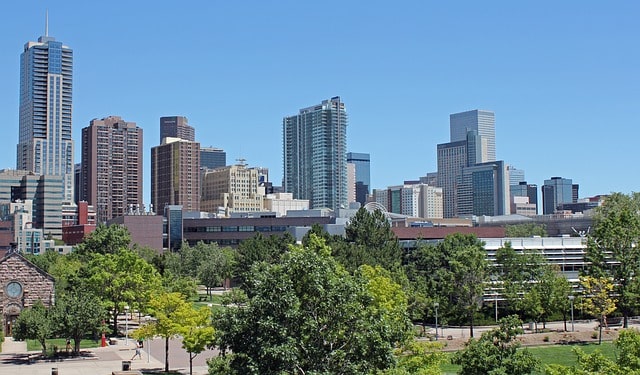 “As one of the nation’s biggest hemp markets, Colorado’s landmark decision to outlaw hemp-derived THC isomers is likely to reverberate across the country and around the world."
- Deepank Utkhede The GrowthOp