Delta 8 THC is not allowed in the State of Rhode Island. Unlike CBD, Delta 8 is psychoactive and will get you high. Learn about the legalities of buying and selling Delta 8 in the State.

To get a better understanding for how the state views Delta 8, we first want to view how Tetrahydrocannabinol (THC).  At the federal level, Delta 9 is legal up to the .3% level as measured on a dry weight basis.  The state hasn't established other regulations for Delta-9 beyond those limits so it is assumed that residents can buy a Delta-9 set online and not be at the mercy of buying from a local dispensary.

No, Delta 8 THC is not legal in the State of Rhode Island.

In Rhode Island, Delta 8 is not allowed. Rhode Island's Delta-8 laws prohibit tetrahydrocannabinols, trans tetrahydrocannabinol, optical isomers, salts of isomers and other hemp derivatives from human consumption which have known pharmacological activity. As one of the isomers of hemp, hemp-derived Delta 8 THC is one of the many forms of hemp which is federally protected under the 2018 Farm Bill. The Farm Bill specifically restricts the delta-9 tetrahydrocannabinol concentration to remain at or below .3% Delta-9 THC as measured on a dry weight basis. Even though the federal government considers industrial hemp products "legal hemp", Rhode Island's Delta 8 legal question has already been answered: their stance on tetrahydrocannabinols, the psychoactive constituent in industrial hemp, is that it is illegal in the state.

Contentious debates over THC (meaning tetrahydrocannabinols) have gone on for years. The industrial hemp plant cannabis sativa has been the target for decades, and it was only until recently that federal officials legalized the cannabinoid content of industrial hemp. Industrial processes to extract cannabinoids from natural hemp flower has already begun, which led to the new CBD Market several years ago. The cannabinoid potency of concern has always been the .3% Delta-9 THC levels, as stated in the Farm Bill. Delta-8 THC isomers became federally legal due to the passage of the same Farm Bill signed into law by the president in 2018.

Studies by experts confirm the psychoactive component of Delta-8 THC with well-documented scientific studies. In other US States, Delta-8 THC is legal. However in Rhode Island, it is considered one of the many Controlled Substances in the state.

Under current law, Delta-8 THC is illegal as current law prohibits the substance. Due to Article 20 Sub A which was amended in 2019, Delta-8 is mentioned by name, and generalized as a type of THC prohibited in the state.

In the Act, it states the following:

THC is defined as the following:

With this legislation, Rhode Island legalized hemp-derived products meeting the federal guidelines as described in the 2018 Farm Bill to not exceed .3% Delta-9 THC, however, state law goes a bit further to limit Delta-8 THC and any "intoxicant" found in either industrial hemp or marijuana.

It was House Bill 8232 (HB 8232) which provided the state's pathway for the state's Hemp Growth Act. Following the passage of the 2014 Farm Bill, Representatives Melo, Bennett, McNamara, Corvese, and Tobon introduced the Act which was then aimed to take effect the first of 2017.

HB 8232 treats hemp as an agricultural product and legally establishes the Hemp Growth Act to regulate its production. The Department of Business Regulation is in charge of state regulations concerning licensing and regulation for medical marijuana. The Department is also authorized to certify any higher educational institutions in Rhode Island to grow industrial hemp for agricultural or academic research.

Beyond hallucinogenic substances and the like, by reviewing the state's list of controlled substances, Delta-8 THC is considered a Tetrahydrocannabinol which is illegal in the state.

In Part 1308 of the Schedules of Controlled Substances, it states:

As used in this section, the following terms shall have the meanings specified:

(1) The term processed plant material means cannabis plant material that has been subject to industrial processes, or mixed with other ingredients, such that it cannot readily be converted into any form that can be used for human consumption.

(2) The term animal feed mixture means sterilized cannabis seeds mixed with other ingredients (not derived from the cannabis plant) in a formulation that is designed, marketed, and distributed for animal consumption (and not for human consumption).

(3) The term used for human consumption means either:

(i) Ingested orally or

(ii) Applied by any means such that THC enters the human body.

(4) The term intended for use for human consumption means any of the following:

In the List of Controlled Substances, it defines THC as the following:

The Controlled Substances Act prohibits any product that contains any amount of THC that is intended for human or animal consumption. Any product with a tetrahydrocannabinol (THC) component, including hemp and derivatives like Delta-8-THC, are classified as Schedule I Controlled substances in the state.

Since Delta 8 THC is illegal in the State of Rhode Island, residents can not buy Delta 8 THC products, such as Delta 8 Gummies, with a shipping address located in the state.

Rhodians are continuously supportive of Delta 8 THC and pushing towards more favorable Hemp Laws in the state. Check out some of the standout organizations in Rhode Island: 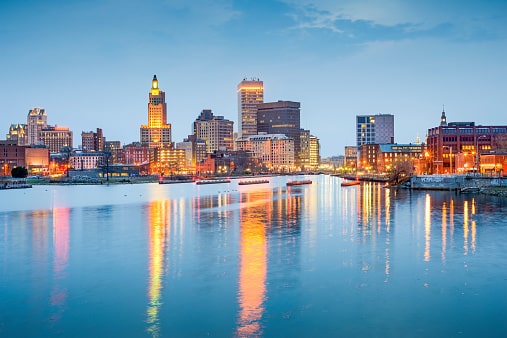 “While medical marijuana has been legalized in Rhode Island since 2006, the state has some of the harshest sentencing laws in the country for certain levels of possession."
- Natasha Lennard The Intercept