Is Delta 8 THC Legal in Idaho?

In the State of Idaho, Delta 8 THC is not allowed. It is federally legal due to the 2018 US Farm Bill which made industrial hemp-derived products like CBD and Delta 8 legal (as long as the Delta 9 contents remain under the .3% delta-9 THC threshold). Some US States like Idaho have their own laws regarding these products in their states.

No, Delta 8 THC is not legal in the State of Idaho.

In Idaho, Delta 8 is not allowed.  Idaho was the last state to legalize industrial hemp, and current Idaho Delta 8 THC Laws restricts these types of industrial hemp products.

Since the passing of the federal Farm Bill of 2018, Delta 8 legal concerns have come up as lawmakers have argued about the guidance of monitoring specifically the  delta-9 tetrahydrocannabinol concentration (Delta-9 THC) level to not exceed .3% as measured on a dry weight basis.  Relating to hemp, legislative intent from the federal level has always been in monitoring specifically the Delta-9 THC levels as it concerns the legality of hemp.  It's only until recently that state lawmakers have needed to rethink their definition for tetrahydrocannabinols within the state.

What some lawmakers failed to realize is that there are many derivatives of tetrahydrocannabinols other than the Delta-9 THC type.  Since the passing of the 2018 Farm Bill, states have taken guidance from that bill which turned the hemp plant (before-then considered a drug product) into plant material and then was extracted to turn into hemp-derived products, like CBD.  From 2018 and on, legal hemp opened up the nationwide industrial hemp market.

Idaho, though, will be missing out.  Lawmakers in the state have determined their stance on tetrahydrocannabinols, and Delta-8 THC isn't allowed.

State law classifies all tetrahydrocannabinols and trans tetrahydrocannabinols under the same umbrella of restricted substances in the state. Though the federal government specifically regulates hemp-derived products to not exceed .3% Delta-9 THC, state legislators generalize THC to all types and varieties.

In House Bill 122, tetrahydrocannabinols is defined as:

Tetrahydrocannabinols, except in hemp with no more than three tenths of one percent (0.3%), or synthetic equivalents of the substances contained in the plant, or in the resinous extractives of Cannabis, sp. and/or synthetic substances, derivatives, and their isomers with similar chemical structure such as the following:
i. Tetrahydrocannabinols:
a. ∆ 1 cis or trans tetrahydrocannabinol, and their optical isomers, excluding dronabinol in sesame oil and encapsulated in either a soft gelatin capsule or in an oral solution in a drug product approved by the U.S. Food and Drug Administration.
b. ∆ 6 cis or trans tetrahydrocannabinol, and their optical isomers.
c. ∆ 3,4 cis or trans tetrahydrocannabinol, and its optical isomers. (Since nomenclature of these substances is not internationally standardized, compounds of these structures, regardless of numerical designation of atomic positions are covered.)
d. [(6aR,10aR)-9-(hydroxymethyl)-6,6-dimethyl-3-(2methyloctan-2-yl)-6a,7,10,10a-tetrahydrobenzo[c]chromen 10 1-o1)], also known as 6aR-trans-3-(1,1-dimethylhep 11 tyl)-6a,7,10,10a-tetrahydro-1-hydroxy-6,6-dimethyl-6H 12 dibenzo[b,d]pyran-9-methanol (HU-210) and its geometric 13 isomers (HU211 or dexanabinol).

Though Delta-8 THC isn't mentioned specifically, we can infer that it isn't allowed as it can be generalized under the Tetrahydrocannabinols classification. Being technically one of the salts of isomers from industrial hemp, Delta-8 THC derived from hemp is legal though the total THC levels must not exceed .3%. When Delta-8 and Delta-9 are combined, THC levels would likely exceed Delta 8 THC Possession Limits since most products contain higher amounts of Delta-8 THC than allowed by the State of Idaho. Delta-8-THC with more than .3% is classified as “marijuana” by the state, and is treated as a Schedule I drug.

The House Bill 122 and Senate Bill 1345 makes it possible to grow and manufacture hemp so long as the activities follow the state's rules. The laws also amends existing legislation, changing wording for research and production of hemp while adding an exemption regarding Tetrahydrocannabinols.

Current rules regarding the state's Hemp Research and Development Act can be found online, as the Governor recently signed House Bill 126 to establish the new program.

According to Idaho's Uniform Controlled Substances Act, all versions of tetrahydrocannabinol are classified as the same substance. The state makes no differentiation between Delta-9-THC and other forms of THC even in material classified as hemp.

Idaho state law considers Delta-8-THC to be a controlled substance, meaning that it is illegal in the state.

Buying and Shipping Delta 8 in Idaho

Since Delta 8 is illegal in the State of Idaho, residents can not order products with a shipping address located in the state.

Idahoers are continuously showing support of Delta 8 THC and pushing progress towards better Hemp Laws. Check out some of the standout organizations in the State:
Idaho Citizens Coalition for Cannabis
Idaho Marijuana Policy Project 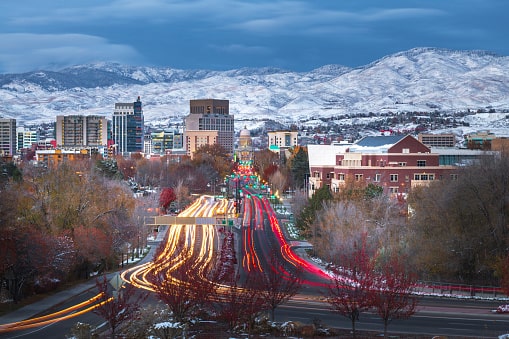 “Idaho is one of only three states without some sort of policy allowing residents to possess products with even low amounts of THC, the psychoactive chemical..."
- Keith Ridler The Spokesman-Review