Is Delta 8 THC Legal in Arizona?

In the State of Arizona, Delta 8 is not legal due to current state law. The US Farm Bill made industrial hemp-derived products like CBD and Delta 8 THC federally legal so long as they are below the .3% Delta-9 THC threshold, as measured on a dry weight basis. Some US States have their own laws regarding these products in the States, such as Arizona. Unlike CBD, which is a non psychoactive substance that doesn't make you high, Delta 8 has psychoactive properties and will get you high if ingested.

Delta-9 THC is adundant in the industrial hemp plant and is legal in Arizona.  Thankfully for Arizonians, you can now shop Delta-9 THC from the comfort of your own home, without the need of a medical card, and get the products shipped to your location-- all legally.  With Delta-9 being a type of THC which is legal in the state, what does Arizona say about Delta 8 THC?

No, Delta 8 THC is legal in the State of Arizona.

In Arizona, Delta 8 is not allowed but that could be changing soon. Due to the voter-approved Proposition 207 in November 2020 which legalizes recreational marijuana, adult use of cannabis and hemp derivatives like Delta 8 THC could quickly become available on the market.

Prop 207, also known as the Smart and Safe Arizona Act (SSAA) received overwhelming support receiving the most votes in the State's history. However, it has being contested by state legislatures who are arguably challenging the will of the voters with the following bills:

If you're residing in Arizona and would like to urge your representatives to align with the will of the voters, you're encouraged to voice your concern for their bills so that Delta-8 THC can be legalized along with recreational marijuana later this year.

Currently, both natural hemp derivatives and synthetic cannabinoids are regulated in Arizona due to the euphoric effects experienced by users of Delta-8 THC. In many other states, state officials follow the guidance of the federal regulators which advises that Delta 9 THC should be less than or equal to .3% Delta 9 THC measured on a dry weight basis.

With some state officials going rogue on the federal guidelines, hemp production has been halted forcing industrial hemp companies, like Dharma D8, to restrict the sale of Delta-8 products in the state of Arizona.

According to 36-2501 from the Arizona Legislature, Delta-8 is not legal in Arizona since law considers all forms of THC to be illegal in the State. In their definitions, they state:

"Cannabis" means the following substances under whatever names they may be designated:

(c) Every compound, manufacture, salt, derivative, mixture or preparation of such resin, tetrahydrocannabinol (T.H.C.), or of such plants from which the resin has not been extracted.

So beyond marijuana plants, federally legal Delta 8 THC is not available for sale in Arizona due to the laws wording which generalizes all forms of THC, and governing officials are not following the guidance from the federal-level which simply limits the Delta-9 THC concentration to .3% or under.

The 2018 US Farm Bill made industrial hemp-derived products like CBD and Delta-8 THC federally legal so long as their Delta-8 contents are under the .3% threshold Delta-9 THC. This in effect, limited the psychoactivity of the hemp products in order to keep it from getting you high, but it doesn't apply to drugs on a state-level since each state has its own laws regarding these substances in their own State.

Current state law is pretty clear: anything that will get you high is illegal to purchase and sell in Arizona unless it falls under CBD legislation where its Delta-9 THC content must be lower than .3%. So buying and selling Delta-8 THC products are strictly prohibited by current AZ legislature laws.

The Arizona Department of Agriculture offers an Industrial Hemp Program. This Act was passed in 2017 and provides regulatory provisions for growing industrial hemp in the state. The law states that anything withTHC levels less than .3% is federally legal but it must be cultivated for research purposes only within the State of Arizona under an industrial hemp pilot program authorized by this governing body.

According to the Controlled Substances Drug Schedules for the State, marijuana (cannabis) is considered a Schedule I Drug and is illegal in the State of Arizona.

THC is listed as a Schedule I drug on the Controlled Substances Drug Schedules for the State. According to the schedule, Delta-8 THC falls under this classification and has misuse risks, and should not be used in the state.

Hemp-derived Delta 8 THC along with cannabis-derived compounds do interact with the cannabinoid receptors within the body's Endocannabinoid System. Since the beginning of regulation for all forms of hemp and cannabis dating back to 1937, delta-9 tetrahydrocannabinol concentration levels have always been the concern due to this chemical compound providing psychoactive effects in users.

Recently discovered, the Delta 8 THC legal talks have been underway as yet another psychoactive cannabinoid found naturally occurring in the industrial hemp plant. Considering the psychoactive ingredient of Delta-8, states like Arizona haven't seemed to be interested in making legal exceptions for this cannabinoid due to its psychotropic potency.

So what does this mean for buying and selling it?

Buying and Shipping Delta 8 in Arizona

Since Delta 8 is currently illegal in the State of Arizona, residents can not buy Delta 8 products with a shipping address located in the state. As Delta-8 is considered an illegal substance due to how the definition of hemp is written into the state's law, derivatives of hemp and isomers from hemp are strictly prohibited in the state.

Arizonans are continuously supportive of Delta 8 and pushing progress towards better Hemp Laws in the State. Check out some of the standout organizations:

Could a Pima County Ruling Threaten Marijuana Expungements in Arizona?

Recreational marijuana sales begin in Arizona: Here are those approved to sell it

An In-Depth Breakdown of Prop 207 in Arizona

Arizona's Passage of Prop 207 to Legalize Recreational Cannabis in Arizona 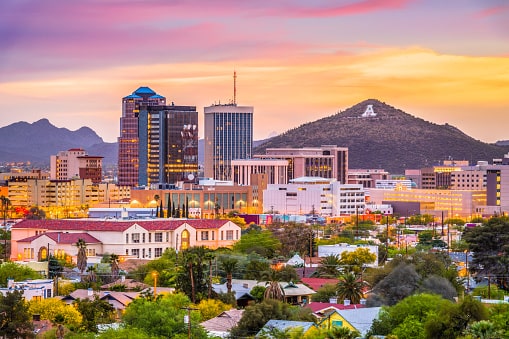 “The NFL used to test players for THC over the course of a four-month window. That has been narrowed to just two weeks, making it considerably easier for players to pass THC drug tests."
- David Hudnall Phoenix New Times