Does Delta 8 make you hungry?

With all the buzz surrounding the new legal-version of THC, it makes you wonder if Delta-8-THC has any of the same characteristics of using marijuana that gives you the munchies when you get high? We went out to find the answer to this important question as we, too, want to know whether the use of this cannabinoid will make you hungry or not.

After taking a modest serving of Delta-8 hemp-derived products, it's common to feel hungry as studies have found Delta-8 to be an appetite stimulant. However, the findings aren't conclusive.

An earlier study from the 1990s suggested that Delta-8 also has potential as an appetite suppressant, which contradicts other studies. It's been suggested, though, that both stances might be correct and it actually relates to the proportion of Delta-8 being consumed compared to the other counterparts found in the hemp material.

Since industrial hemp material contains a lot of fiber, it acts as a natural appetite suppresant. However, the Delta-8 THC counteracts that for some people and actually increases the user's appetite while "high" from Delta-8.

Studies are still underway to definitively tell us more how Delta 8 relates with hunger, but the science seems to lean towards the notion that higher-levels of Delta-8 THC result in more cravings and hemp-derived products with lower amounts of THC leads towards appetite control.

For our analysis, we're simply focused on providing you information for legal cannabis, and specifically Delta-8 THC which is protected under the 2018 Farm Bill.

Did you know that there are Delta-8 strains for appetite? Strains such as Bubba Kush, Sour Space Candy, and Hawaiian Haze are strains known for their natural characteristics for increasing your appetite.

The strains such as Special Sauce and Pineapple, however, provide the user with a more focused-high and may actually suppress hunger during a period of time, depending on the user. 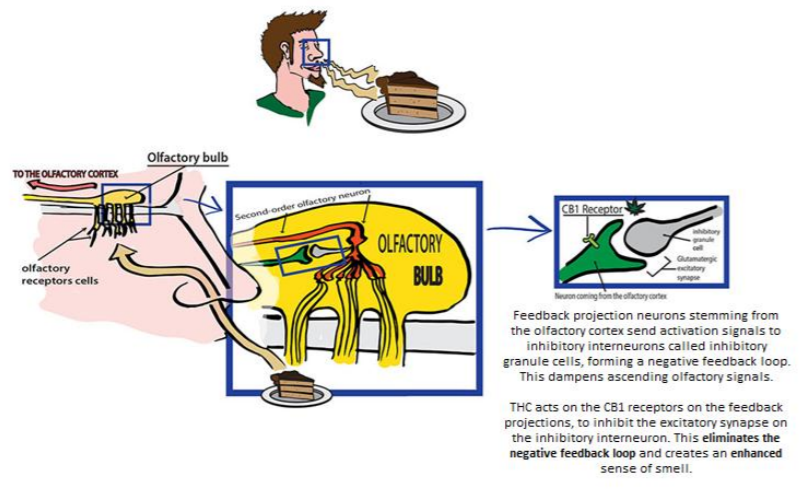 According to a study by UTT BioPharma, they proclaim, "The ‘Munchies’, a term well associated with the insatiable desire to eat when under the influence of Cannabis, is caused by a various array of physiological events which lead to the stimulation of hunger." This is due, as they suggest, with how the Delta-8 THC interacts with the body's endocannabinoid system (ECS).

The CB1 receptor (of the ECS) is to blame for the effect of cannabis causing hunger due to an "augmented sensory response to odor" and the tendency "to have a higher appreciation of food than usual". When this occurs, a negative feedback loop occurs from the CB1 receptors as the sense of hunger and smell are closely intertwined, the CB1 recepter has been shown "it can be a key regulator in modulating appetite," which is a reason why cannabis products can contribute to cravings of hunger.

The central role of the CB1 receptor within the ECS is showing to be a determining factor in how hunger is felt within the user. Depending on whether the CB1 receptor is being blocked or activated, cravings -- or the the lack therof -- can be further researched in order to provide the user the right strain for their urge to either suppress or stimulate appetite.

More studies are underway, but this is where we're at in our findings as they relate with Delta-8 and appetite.