Blackberry Diesel is an 80% sativa strain that has gained much recognition for its balance between uplifting, creative effects alongside a relaxing body high. Named after the sweet smell of blackberries followed by the sharp diesel taste, this strain is cherished for its many therapeutic uses. 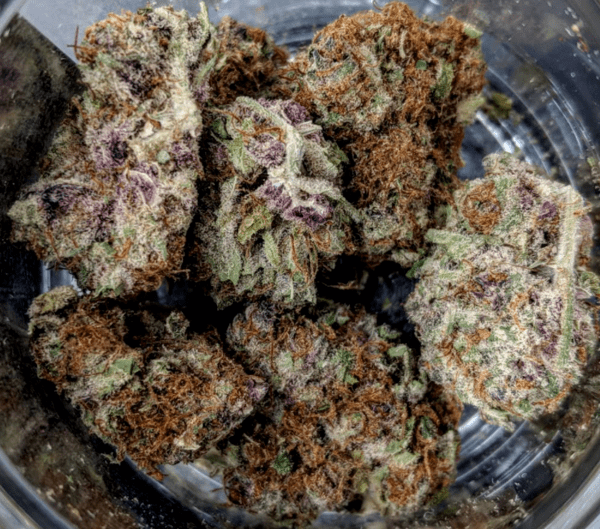 The Blackberry Diesel strain is commonly used in HHC vape products. The strain is a great choice for Hexahydrocannabinol (HHC) products.

Completely unique to other strains I've worked with in the past because it can produce both mind-bending psychoactivity and heavy stone body sensations. For me personally I knew instantly I could make edibles with it when my head starts to zone out while smoking too much—perfect medicine for unwinding but also not leaving you locked on the couch! The one downside of this strain is dry eyes if you are prone or without eye drops--the body stone is powerful but the head high brings focus to your eyes.

Blackberry Diesel's aroma is one that I have not experienced before in my life, absolutely amazing! The smell of sweet blackberry mixed with diesel fuel made me immediately regret not getting a full test run for this strain. It smells just as good as it tastes/smokes, all over top-notch quality. Combined with the look and feel of this bud would make anyone want to take it home. Blackberries are naturally large dark purple sugar leaves which grow outwards like cubes (or diamonds depending on who you ask). Most phenotypes will show trichome coverage completely across all sugar leaves making them appear almost white; these visual aspects are accompanied by fruity aromas. Completely coated in THC rich resin, the bud feels very sticky in your hands when you are breaking it up.

Blackberry Diesel's smell is very strong and sharp, instantly making one think of gasoline or diesel fuel. I have never smelled a strain that smells exactly like this! It was hard to put into words the smell initially but the closest thing that comes to mind is gasoline mixed with blackberries.

Upon smoking "Black Berry Diesel", potent effects begin with an uplifting head high quickly turning into a heavy stone body buzz within minutes; the onset of both the mind-altering cerebrally focused effects along with physical relaxation was instantaneously apparent...very similar to what I would experience by sugar leaves (the sugar leaf itself is where flower gets most of its THC from).

In terms of the mind-altering effects, it's very cerebral but can quickly switch to heavy body stone which felt great when walking around. Great medication for creative projects and social gatherings! This strain could be considered a creeper because I went about my business getting things done before noticing how powerful it was.

Some side effects I experienced included dry eyes, cotton mouth, and short term memory loss (not so much forgetfulness but more like not wanting to use your brain for simple tasks).

This strain would be perfect if there were less dry eye side-effects; other than that I really enjoyed it. Also—some might find this bud too stimulating since the head high brings

What strain is Blackberry Diesel?

It's no wonder that all the hype about strain Blackberry Diesel has been influencing the cannabis industry. Also commonly referred to as blackberry haze or blackberry haze strain, a blackberry kush vape could make all the difference!

Famous since the original diesel strain became mainstream, the blackberry sour strain turned diesel, with much appreciation by consumers. The blackberry strain continues to be one of the most popular in the nation.